The Allies had their share of good weather and will now have to pace up the battle for France. Its time for them to capture CHERBOURGH and to go for a breakthrough.

END_OF_DOCUMENT_TOKEN_TO_BE_REPLACED

When I play wargames I regularly read books on the subject, view movies, and do some background research. For Dark Summer only the first few turns are well covered by the many publications on D-Day. One interesting source I came across recently is the Imperial War Museum’s website with several articles on D-Day and Normandy. The German Response to D-Day, What Happened After D-Day, and Tactics and the Cost of Victory in Normandy are but a few such articles that will give you more insight into this campaign.

Another book I read some time ago and that I much recommend is If You Survive (George Wilson) written from the perspective of a junior infantry officer that took part from the Saint-Lô breakthrough July 1944 to the assault on the Siegfriedlinie February 1945.

END_OF_DOCUMENT_TOKEN_TO_BE_REPLACED

Dark Summer is the latest addition to my wargames library. I consider it one of the COSIMs for casual gaming as the rules are few with little crome and thus fairly easy to learn. Moreover the extended example of play is an excellent starter to understand the rules mechanics. Therefore I am confident that face to face it should produce an outcome in a few hours of enjoyable game time. The chit pull system off course makes it most suitable for solo play.

So off I go and replay the Battle for Normandy from D-Day to the Allied breakout towards Brittany and the final exploytation phase over the Saine river and to the East of France.

END_OF_DOCUMENT_TOKEN_TO_BE_REPLACED

At Grenadier 2018 I came across some ASL scenario packs, dedicated magazines, and the odd HASL pack. One of them is the HASL Scotland the Brave I & II from Chritical Hit. Most products from CH share a bad reputation for being untested, unbalanced, and badly produced. Nevertheless I like HASL a lot and wanted to give Scotland the Brave the benefit of the doubt.

The scenario and campaign game feature the British Operation Epsom that was staged to take the Normandy city of Caen from 26 June to 1 July 1944. The units involved in the campaign game are the British 11th Armoured, and 15th (Scottish) Divisions. The German units involved are the 2nd Panzer Division, the 2nd, 9th, 10th, and 12th SS-Panzer Divisions. 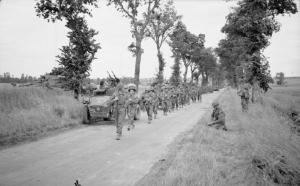 END_OF_DOCUMENT_TOKEN_TO_BE_REPLACED

At Grenadier 2018 I came across a small pack of scenarios featuring the Royal Winnipeg Rifles. This Canadian unit fought with the 3rd Canadian Infantry Division and entered the Normandy theatre as part of the D-Day landing forces on June 6 1944. Jeff and I are going to play all 4 scenarios (I hope I can tempt him to do this).

END_OF_DOCUMENT_TOKEN_TO_BE_REPLACED

Some years ago I went on holiday to Normandy. Of course I took the opportunity to visit the museums and to move around the various historic sites of the D Day landings. Our location was Chateau Bellenau which gave me daily access to the area where 101st AbnDiv was assigned its combat missions. 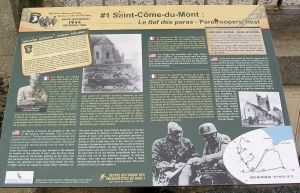 I followed a historical trail in and around Saint-Côme-Du-Mont / Carentan that guides visitors to various sites that saw combat during and shortly after D Day.

END_OF_DOCUMENT_TOKEN_TO_BE_REPLACED

One more D-Day in Normandy ASL game featuring the 101st US Airborne Division. This scenario I have chosen for my first PBEM experience via VASL. My opposite, a very nice guy from Spain, opted for the Americans so I get to defend the village of FOUCARVILLE in Normandy on June 6 1944. My unit holds the promising designation Grenadierbatallion 919, but in reality the squads all are second rate and even conscript. The only real German asset is the 75mm anti-tank gun and a fortified building.

END_OF_DOCUMENT_TOKEN_TO_BE_REPLACED

The scenario developes quickly to its climax. Both sides are desperate to execute their respective battle plans. Actual units lost so far are a squad, a HS, and a SW (support weapon) for the Americans, one squad for the Germans. This might look like casualties had been relatively light. But we need to remind ourself that a broken MMC (multi man counter) represents a small fighting unit that probably was shocked because of having   comrades killed or wounded.

It speaks for the good morale and leadership on both sides, that the units come back and still are fighting on quite resolutely. So lets continue to follow our cardboard heros under the command of Captain Suchar

of the 501st Parachute Infantry Regiment and Leutnant Baumann

END_OF_DOCUMENT_TOKEN_TO_BE_REPLACED

We are half-way through the scenario now. I for my part have learned a lot about the game mechanics. I do very much appreciate the complexity of Advanced Squad Leader. Indeed, I find the LOS rules in the bockage hexes the most complex issue. And the inclusion of the concealment rules greatly changes the flow of the game. It calls for much prudence, even caution when moving on the field of battle.

But now lets get startet into the next crucial turns when it must be decided who will prevail in this typical D-Day fighting over small villages and manours. We surely are getting close to the klimax of this engagement. Here you see the situation at the start of turn 5.

END_OF_DOCUMENT_TOKEN_TO_BE_REPLACED

One of the early ASL modules I bought some 25 years ago was the “Paratrooper”. This should give me all I need to play any Normandy scenario involving the US airbourne divisions. And there will be no tank duels and littel artillery, which should greatly reduce complexity for my first few solo games.