For GT3 the DPRK ground forces are to break through all along the DMZ and to finally initiate the encirclement of Seoul. The main effort will be in the KPA II and V Corps area. DPRK will introduce KPA 108th and 425th Mechanized Corps of the second strategic echelon with the mission to gain the line Pyeongtaek to Wonju. 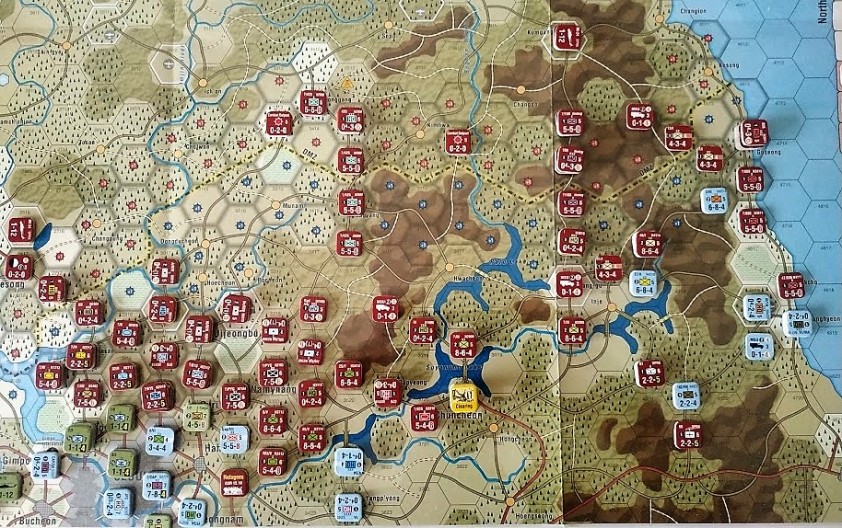 END_OF_DOCUMENT_TOKEN_TO_BE_REPLACED

For GT2 the scenario states an DPRK Initiative Turn. This is important as an initiative turn provides three movement and combat opportunities to the attacker. Right now the northern offensive has broken into the ROK line of fortifications in all secors of the front. This turn the KPA needs to break through the DMZ. The DPRK Supreme Command decides to reinforce success and shift the main point of effort to the central sector. The object in this sector is to break through the DMZ and take the city of Uijeongbo.

END_OF_DOCUMENT_TOKEN_TO_BE_REPLACED

In this scenario I assume the Democratic People’s Republic of Korea (DPRK) leadership sees a favorable opportunity for reuniting Korea under communist rule. Everybody is taken by surprise including their Chinese allies who now face a dilemma. On the on hand they are unwilling to risk major hostilities with the US, but at the same time a downfall of the north korean regime with the possibility of US allied forces knocking at china’s dorstep  is a national no-go. The People’s Republic of China (PRC) therefore decides to keep their intervention to  logistics, intel, some air and naval assets, and special operation forces, in game terms: