With my first positve experience with Somme 1918: Bloody Spring I wanted to go for the next scenario. This covers Unternehmen Michael from March 21st to April 1st 1918 (Turn 1 to 4) using the full starting forces with the basic game.  With some spare time at hand I set up the game in a quiet corner of the house. Its an awesome sight to see all those German counters cramped on the eastern edge of the playing area.

In the southern sector this scenario is identical to Scenario 1 – v. Hutier Strikes. In the northern sector it adds – from north to south – the 17th and 2nd German Armies, both mainly  opposing the British 3rd Army. The main German effort I choose to direkt at the border of the two British armies. Here Michael Süd in combination with Bruchmüller will force a breaking open of the British front line. 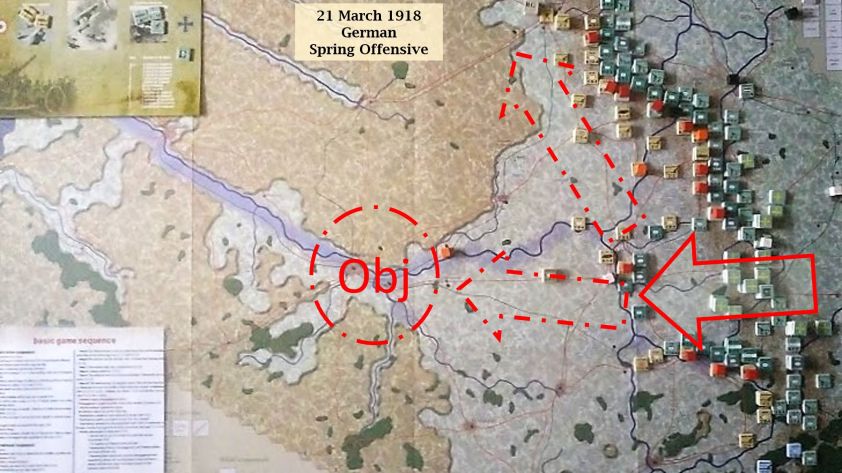 The main objective is the key city of Amiens which the British will mainly have to defend on their own with minimal own and only week French reserves coming up from the south on March 24th. 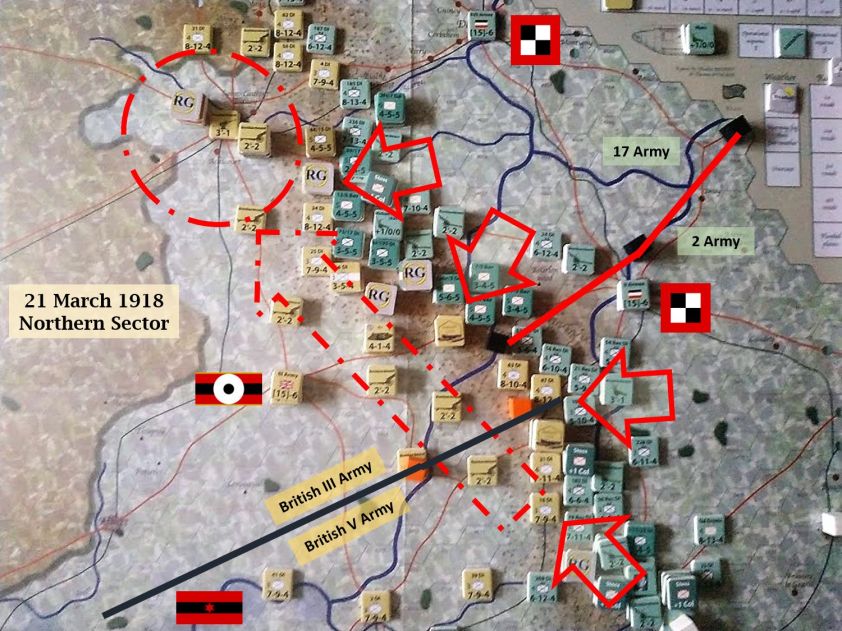 In the northern sector the British 3rd Army’s divisions put up a stubborn defense and thereby retain all their positions in the trench line. But even on the evening of the first day of the German offensive it becomes clear that the positions in the Flesquiers salient will soon become untenable. The 21st, 9th, and 47th Divisions will have to retire or face encirclement and subsequent destruction. 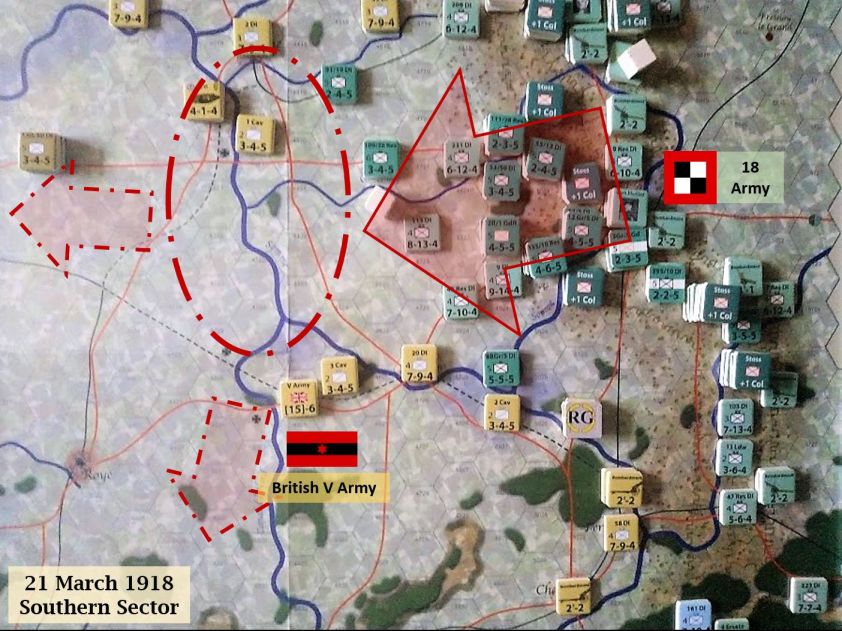 In the southern sector the German 18th Army has achieved the break through it had hoped for. Bruchmüller’s Buntschießen or mixing of high explosive with smoke and gas grenades has taken its toll on the luckless defenders.  British 66th, 24th, 61st, and 36th Divisions are overrun and destroyed in the onslought. The Germans have ordered a dozen formations into reserve status that now can exploit the break through west of St.Quentin. 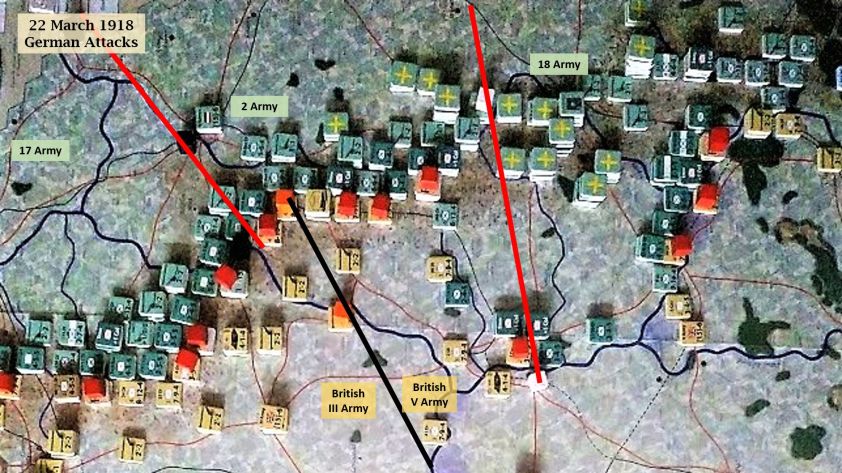 This map shows all the German attacks denoted by the red blocks. From this perspective the huge gap in the British 5th Army’s front line is evident. Despite local counter attacks supported by tanks the Germans follow up into the open ground and will soon force the crossing of the Canal Du Nord. 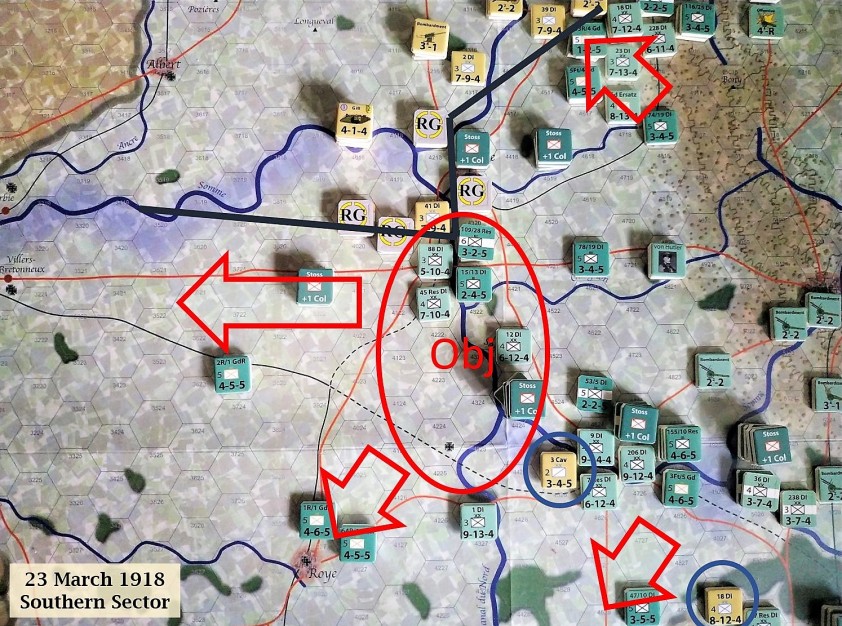 The German 18th Armee has broken through with its lead elements rapidly gaining  ground towards Amiens just off the western edge of the map and Roye and Montdidier near the southern edge. Two unengaged force marching British divisions will come to late to deny the Germans their victory condition, the capture of Amiens. 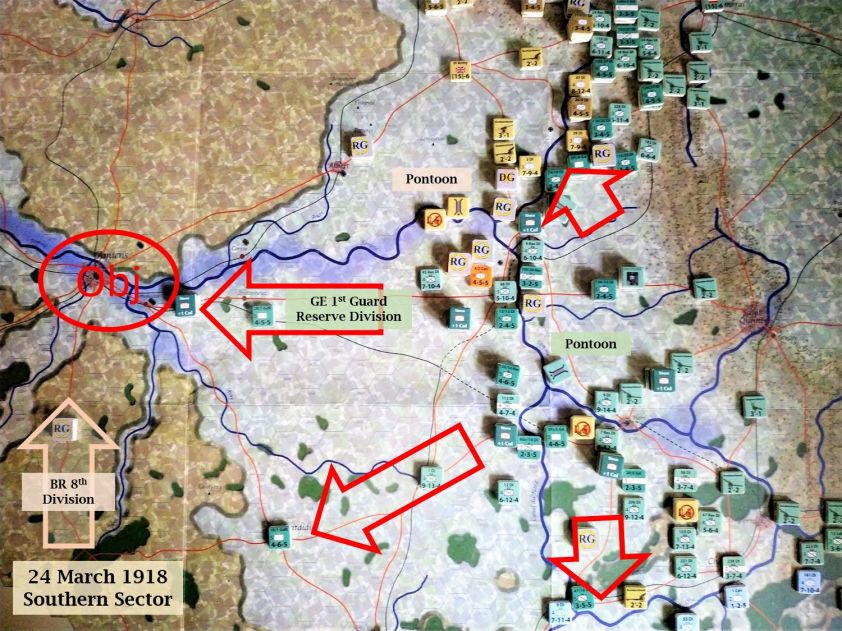 Start of Turn 5 I break off the game as the Germans cannot be stopped from achieving their victory condition, the capture of Amiens. This is a clear German Strategic Victory.

I think this result is mainly due to the outcome of the initial attacks. The only ones that actually went off as planned were those in reach of the Michael Süd offensive and these were particularly successful. The British  defenders all failed their tactical coordination rolls. This ment that they could not retreat but had to sustain the heavy step losses. Thus a gap of some 24 kilometers (8 hexes) opened up devoid of any British units. This General von Hutier‘s divisions ruthlessly exploited.

With the experience of Scenario 1 I had a good idea how best to use the reserves to exploit any success in breaching the line.  Also in this scenario you get access to the pontoon bridges. They are very usefull indeed to negotiate the larger rivers. The German Stoßtruppen used them much to their advantage.

My handling of the British forces leaves much to be desired. In hindsight I should have somewhat thinned the line in front of Arras to build up an early reserve to protect Amiens. So next I will need to find out a way for the British to slow down the German attack sufficiently to deny them Amiens.

Playing the game with real counters on a real map can be fiddly at times. The counter density on the front line is high as are some of the stacks. As at 2mm the counters are quite thick it can happen that you get stacks of up to 1.4 cm hight. I had several incidents of  counters toppling from those highest of stacks. With that in mind I will probabely use the VASSAL module for the Campaign Scenario.