The Pacific seams to be a more exotic theatre of operations in World War Two. Empire of the Sun recreates this conflict on a grand strategy level. The seams to mainly focus on the confrontation between the Japanese Empire and America as the emerging superpower. What created my interested in this CoSim were the excellent play through and strategy intro videos you can find on the internet. Now I am hoping for some players that I can play the game with  provided they are interested enough to learn the rules.

The map is excellent, its clear, it shows vastness of the Pacific, and it fits into a rather normal space on the gaming table. I would have thought it needs half the living room to host the entire area. I do indeed like the game component, they are produced to the high standard that one has learned to expect from GMT. 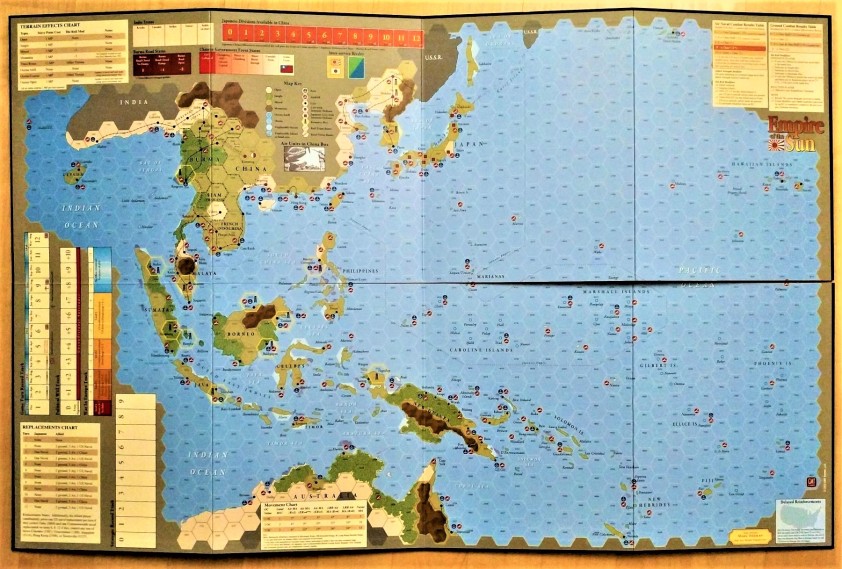 As for the mounted mapboards, I am not a great fan of these. They do allways resist to some extent to being unfolded and laid flat on the tabletop. I have fixated my map in a picture frame to make it lay flat. This works quite well.

I imagine the US NAVY MD/CA 15-10 counter is the one unit with the shortest life expectancy I have ever seen in any game. It represents the capital ships that were sunk by the Japanese during their attacks on Pearl Harbour on December 7 1941. Turn 1 starts with the Japanese Operation Z Card the carrier borne attack on the US NAVY. The turn is intended as a solo experience to new players. It invariably ends in the elimination of the US NAVY 15-10 MD/CA counter. Therefore I thought I might give it a place in this post so it can get to some prominence here at least.