The Marine Brigade is somewhat short of its objectives. Over night an additional Naval Infantry Company and one depleted Machine Gun Company move from the landing site to reinforce the attack. The scene is TM-3 set in the morning of February 5 1943.

German forces arrive on the scene and take up positions covering the approaches to GLEBOVKA. The elite Romanian infantry and engineers continuously offer stiff resistance and threaten the Soviet flanks.

Soviet 255th Marine Brigade is to renew its attack and to take the crest of the eastern hillock overlooking GLEBOVKA. 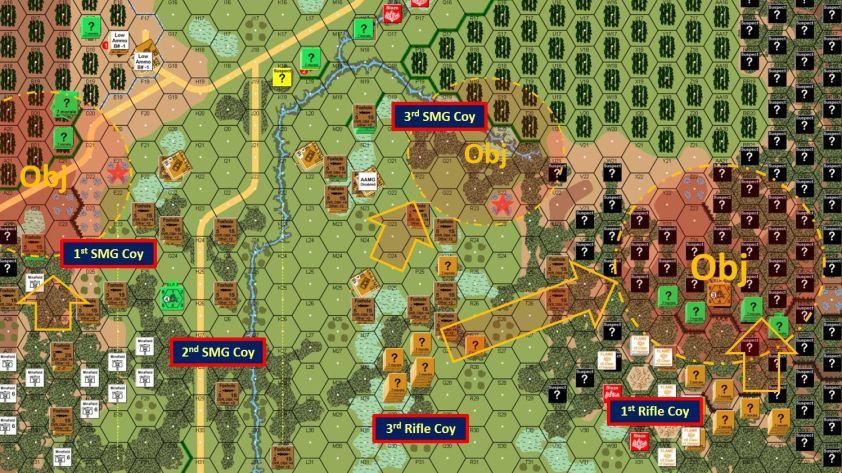 255th Naval Brigade will attack with 4 Naval Infantry Companies to secure a new line from the western vineyeard to the central riverbed and over to the eastern hillcrest with the main effort on the right wing in order to secure the key level 4 terrain in the central eastern valley.

Turn 1:   The blasts of heavy artillery beats announces the commencement of the Soviet afternoon attack. The factory in GLEBOVKA is hit but only little damage is reported. As the Naval Infantry andvances Axis AT-fire and artillery joins in. One M3A1 Stuart is killed by an Romanian 37mm AT-Gun hidden in a fortified house.

Turn 2:   Air attacks and air combat take place over the field of battle. On the ground little damage is done, but in the skies above a Russian and a Romanian fighter get shot down in aerial combat. On the left the Soviets slowly push back the Romanians from their positions. A Stuart tank attempting to free himself from the entanglement of the vines is destroyed by a well placed long-range shot from an German 8.8 cm AA-gun. While the fighting continues in the left and centre of the valley, on the right just below the crest a wildfire is raging on the slopes trapping a platoon of Soviet Naval Infantrymen. 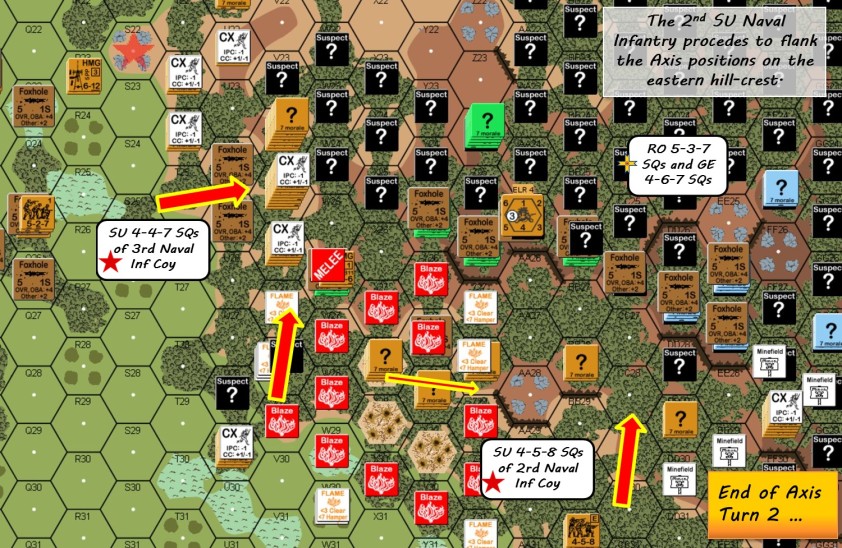 3:  On the left flank the soviet assault on the remaining Romanian positions utterly failed in the face of uncredible romanian resistance. A 2MC test on a broken RO 4-4-7 resulted in a fanatical SQ and hero creation. This leaves the western portion of the valley devoid of Soviet units capable of fighting. In the centre the Soviet advance against the single fortified house makes slow progress. A successful bombing run by a Sukhoi 2 light bomber got rid of one of the German Marder II SPAT-guns. On the right the flanking attack on the hill crest developes.

Turn 4:  Supported by NOBA and  straffing CAS the Soviet attack finally gains pace. The Romanian engineers are hit heavily and lose a full platoon.  Their position on the hill crest is now becomming near untenable. First units of 3rd Naval Rifle Coy set up light mortar positions overlooking GLEBOVKA from the northern slopes of the eastern hill.

Turn 5:  On the left the fighting hase now died down. In the centre the the Romanian strongpoint has finally surrendered and the way is now free for the advance. On theh hill crest to the east the flanking attack is in full progress. The German platoon has started to evade from the hill crest positions to positions further up the valley.

Turn 6:  The Soviets now advance largely unopposed. The 130mm NOBA hits the Manor and the Axis troops positioned there.  The Axis command reacts to the development of the situation by dedicating two additional 105mm OBA to support the few remaining defenders.

The morning attack ends with the Soviets advancing near unopposed towards GLEBOVKA. This attack is a total if costly success for the Soviets. With air and naval artillery support they finally break through the first defensive line  in the Ozerekya Valley. The combination of air power and support by the navy assets proved vital.

1st and 2nd Naval SMG Companies are depleted at 20% strength and need to combine to retain some of their combat power as a field unit. The Naval Infantry Companies have fared much better and are near full strength. Two field promotions are granted to Michman Buzditka

for heroism and Lieutenant Dremov

for his distiguished leadership under extreme battle conditions.

The Axis took heavy casualties. Two entire Ronamian companies, two Marder SPAT guns, and several guns are destroyed. The enemy will now have to fall back and try to establish a new line of defense. Possibly he will decide to attack and regain lost ground.

For the coming  afternoon battle the Soviets