When Italy started into the modern colonial age in Northern Africa it created several indigenous units to serve under Italian command. The oldest of the Royal Colonial Indigenous Forces was formed in 1891 as the Regio corpo truppe coloniali d’Eritrea. Subsequently colonial corps were also formed in Italian-Somalia, Tripolitania, Cirenaica, and Libya. All were combined arms formations comprising infantry batallions, cavalry, mountain artillery, and engineers.

The Italian Ascaris I consinder one of the most colorful range of units of the late 19th and early 20th centuries. Thus I have taken to paint up a pack of Eritrean Ascaris. Each of the Ascaris units are distinguished from another in a most colorful pattern. The unit I chose, the VI Battaglione indigeni, shows green company colors, sash, and tassels.

These figures can serve for colonial warfare in the late 19th century up to the end of the East African Campaign in 1941. Before 1900 they probabely would have worn mostly white uniforms into combat. In 1940 the colorful fezzes would made place for less conspicious brown bonnets. 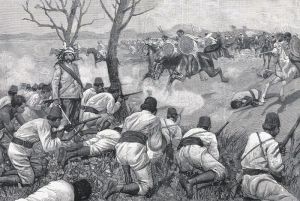 Some contemporary sources consider the Ascaris having been similar in quality and aggressiveness to the British Ghurkas. The Eritrean Askari must have been quite a proud breed of soldiers. Unfortunately this is mostly neglected in the wargames rule systems I know.