Aix-La-Chapelle from June to September 2014 holds an exposition on its history as the medieval centre of imperial power, exquisite arts, and sumptuous treasures. It is the 1200 year anniversary of Charlemagne’s death. Historically interested and lured by the warmth of a sunny summer day I wanted to visit the exposition in the newly built Centre Charlemagne.

The location is situated in the heart of Chalemagne’s medieval palace. The layout and large parts of the cathedral, the townhall, and the connecting buildings originate from the early Merowingan and Carolingian days. Whenever you get to visit the cathedral, take your time to feel out the sensation to stand in the veritable centre of Western European Christianity of early medieval times.

Charlemagne as an personage I find quite interesting. He was a ruthless potentate, a charismatic leader, a very successful field commander, a founder of an empire, and a promoter of arts, education, and rules for the governance of the royal estates. 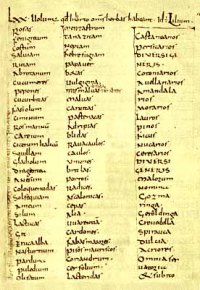 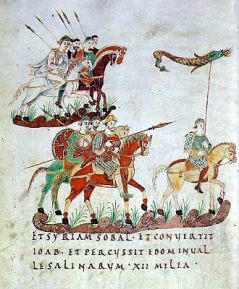 His armies where quite superiour to all their contemporary adversaries. For a wargamer it is quite an intriguing prospect to paint up and lead onto the tabletop an army that carved an empire out of the dark of early medieval times and that was to last for a millenium until 1806.

Here is the crowd that makes up the mass of Carolingian warriors, dismounted miles, foot warriors, and some skirmishers. The famous cavalry that constitutes the core of the iron fist of this army has jet to follow onto the workbench. The impressions I gained from the visit to the exposition might well serve as an incentive to paint up more 15mm Carolingians.